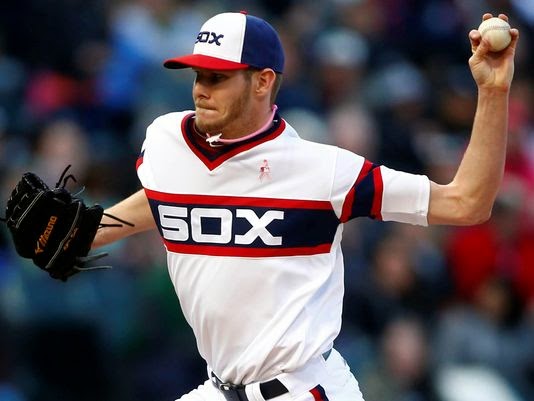 I think that the White Sox finally have the team that they have been looking for. They were one of the teams this offseason that were able to get some pickups to help out with the team. They were able to get the following players: David Robertson, Melky Cabrera, Adam LaRoche, Jeff Samardzija, and Zach Duke. They also extended Adam Eaton to a 5 year contract. They look to have a good pitching rotation with Chris Sale, Jeff Samardzija, and Jose Quintana as the big three starters. They have ROY Jose Abreu that I expect will do just as good as he did last year, if not better. Abreu went .317/.383/.581 his .581 SLG. was the highest in the AL. So with all that being said I think that the White Sox are a playoff team this year. This is a division that you have to play well in the be number one in with the dominate Detroit Tigers and now the Kansas City Royals. In my option they are that number one team because of all the smart pickups that they got this off-season to fill in the missing spots that they needed last year.

The Tigers have been a playoff team for the past 5 years having both good pitching and batting. The Tigers will have to watch Miguel Cabrera who struggled with power last year due to some injury. With the loss of ace Max Scherzer the Tigers pitching is not going to be as dominate as is has been in the past. It doesn't mean they won't be good without him still having aces Justin Verlander and David Price. Anibal Sanchez is a pitcher that they still have that can be dominate but was hurt some last year and missed a few starts. They were able to get Alfredo Simion in a trade with the Reds. Simions had a good 2013 season and has shown that he has potential. The Tigers were also able to pick up 2X home run derby champion Yoenis Cespedes. Cespedes is going to be a huge help to the Tigers defensively wise in the outfield with that cannon arm of his. He won't only be helpful defensively but offensively as well being able to hit 20+ HR every season. I had a hard time trying to decided the first place spot between the White Sox and the Tigers but the Sox just ended up looking to be a bit stronger than the Tiger to me and that's why I have the Tigers the second spot.

The Royals made the world series last year and surprised everyone last year showing that indeed that they had a good team last year. The Royal lost three main guy last year including James Shields, Nori Aoki, and Billy Butler. Without those player I just wasn't seeing how that they could preform the same as they did last year. The Royal were able to pick up Edinson Volquez and Kris Medlen in replacement of James Shields. Lets be honest, those two guys won't be the same as Shields. Shields was a huge factor to their success last year. Don't get me wrong Volquez and Medlen are good pitchers but are good pitchers just not the same dominates as Shields. If Yordano Ventura can do as good as he did in the postseason I think that he will end up having a good regular season, the same goes with Lorenzo Cain who preformed awesome during the postseason and only decent during the regular season. If these two guys can do their stuff all season long I think that they will end up having a really nice season and will be a huge help to the for this new season. One last player that stood out to me last year was the CL, Greg Holland. He has been a dominate reliever since 2012 really showing whats he got in 2013 getting 47 SV with a career low 1.21 ERA. He was also very dominate in 2014 getting 46 SV with a 1.44 ERA. I think that they are still a good team but not the same as last year is the reason the got third place for me.

In my opinion the Indians are just not going to do to well this year with so many of their players getting hurt last season. Nick Swisher is coming of some knee surgery's, Jason Kipnis had some kind of finger surgery, and the new addition the the Indian Brandon Moss had surgery on his right hip. It seems that everyone thinks that since Corey Kluber did so well last year and won the Cy yong last year that he is going to end up doing the same thing this year. I would like to think that is the case, but it just came out of nowhere and I don't think that he will end up having as low of ERA as last year but something closer to a high 2 or low 3 ERA. The Indians Pitching is still young and talented but need a couple more years to learn some more to become better. I placed them in fourth because just because I don't think that they will be able to produce much at all this year and beat the Royals for the third spot.

The Twins did nothing this off-season but garbing little things. They defiantly aren't the best team but they sure aren't awful. The truth is that they don't really have many good player on their team. One player that they do have that is good is Joe Mauer who has won 3 batting titles, 1 MVP, and is a 6X All-Star. Mauer is a great player and a possible future HOF'er in my eyes. The Twins are one of those teams that are work in progress, that's for sure. They have so many good young prospects in their farm system that I'm thinking in about 3-5 years that they will end up being that team that will work it's way up to the top of their division. Right now at this moment the Twin just don't have what is takes to get out of this last spot in their devison.

Do you guys agree what I think or not just let me know and comment below what you thought! I'm pretty confident about this division except my placements on the White Sox and Tigers, I think that those could easily be flipped around.

I choose Miguel Cabrera as the division MVP because I think that he will end up coming back this year and be back to the normal guy we are use to hitting 30+ HR and .300 BA.

I choose Chris Sale as the the division Cy Young because I just don't think that Corey Kluber will end up doing to same stuff that he did last year leaving Chris Sale becoming the best pitcher in this league once he comes back from his ankle injury.