A New Pujols In The Collection 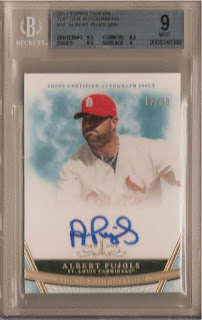 I sold my other Pujols card, and was able to upgrade to this much better 2011 Topps Tier One auto /99 Graded, mint 9 with a 10 auto. I actually bought this card off fellow blogger dodgerpenguin.

This is such a nice card. It's on card, and he's in a Cardinals uniform, which was the last season he played with them.

I know that Pujols stuff has been down lately with him not being like his 2001-2011 season's. I plan on picking up some more stuff while it's down. I expect when it comes time for him to retire in 2021 that all his stuff will rise back up.
Posted by Unknown at 2/24/2016