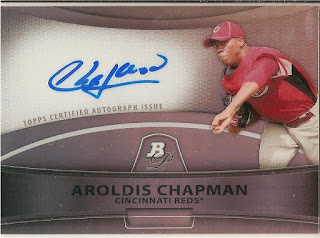 I got a job not to long ago, I think it was about 4 weeks ago. I got my first paycheck so I decided that I would try to find a card to buy for myself. I don't have many Aroldis Chapman's, so I thought that I would try to pick my self up a new auto.  I was able to find this 2010 Bowman Platinum auto for only $15.

I have heard that there is a high chance that Chapman is going to get traded at the end on the trade deadline. The only team that I have head that have talk to the Reds about him was the Nationals. I would love to see him go to the Nationals, but just don't see it going down with them having Drew Storen doing so good right now. If he went to the Nationals I heard that they might make him the set up man but that just really wouldn't be worth the money. I could see him going to a team like the Cubs, who could use him right now. Either way I'm interested to see what happens to him.
Posted by Unknown at 6/30/2015