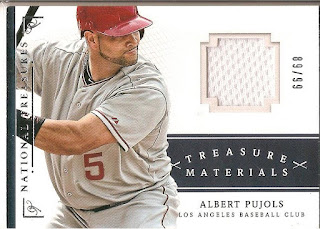 Hey everyone, I finally got some cards the other day at a card show, so I actually have something to post about for once. So, I went to this really small card show in Evansville, IN which probably only had about 12 tables (not kidding). It was small, yes, but there were a lot of good people there and some really cool sellers.

I was able to go to the show and leave without having to spend a penny but still came out with some new cards for the PC. I was able to trade for everything that I got. One card that I was able to pick up was this shown above 2014 Panini National Treasures Treasure Materials relic of Albert Pujols #D/99. This is a pretty sweet card and was a nice card to be card #350 in my collection. I can't believe that I have gotten that many of him and just think that's just a small factor on what all he has out. I have about 15 different relics right now of him but sadly no auto. I'm hoping when I go to the National that I'm able to pick one up.

Albert has been a tear lately hitting HR's like the Machine he is. He just his #20 yesterday, we are also seeing his batting average rise back up right, now it's at a .273 I would love to see him get it back up to .300 and 30+ HR's like when he played back with St. Louis. 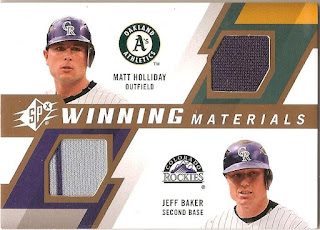 Last card that I grabbed was this 2009 Upper Deck SPx Relic with Matt Holliday and Jeff Baker. Matt Holliday is hurt right now which makes me sad because he was doing well hitting .307 I'm hoping when he comes back he can bounce back and maybe hit some more HR's this time around and keep getting on base.