I got someting good in a repack box!?!?!

Hey guy I got released from the hospital Sunday afternoon. yaa! I was tied of that place. Ok so when I was in the hospital Weston one of my friends came over to visit and he brought me some gifts a Sports Illustrated, grape powerade, and a repack box. Ok I opened it all took all the packs out then I just put them in a stack. I open the first pack which was a 2008 Upper Deck timelines and the fist thing that I saw in the back was this. 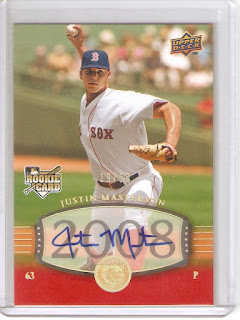 A Justin Masterson RC auto #ed 19/50!! Yeah I'm pretty happy pulling this just from a repack box because you wouldn't think that there would be a chance at all to pull a auto I would though if I ever did pull a hit from one of theses repack box's that it was going to be a relic. This is up for trade. Comment below if you would like this I know that he is playing on the Indians right now.
Posted by Unknown at 6/11/2013