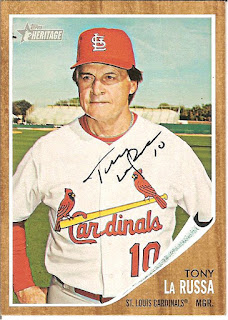 I sent two cards to HOF Cardinals manager Tony La Russa on March 14th, and received both back signed in black sharpie on March 31st for a 17 day success.

First up I have this 2011 Heritage that turned out really well. Oh, good old 2011 Heritage, in my mind the best Heritage so far. Getting this card back signed in black ink just made it that much more better. 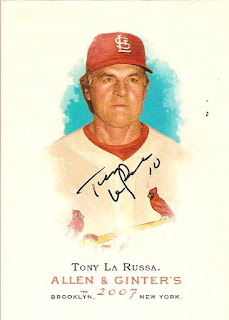 Next, I had also included this 07 Allen & Ginter's thinking it would look good signed, and oh boy was I right. Just take a moment and look at it. I know, it turned out beautiful, right? I guess it's time to dig and find some more 07 A&G to send.