Hello everyone, Andrew here. Yesterday I got a package in the mail from my good friend William. Me and him have been really good friends for almost 2 years now. Wow seems like I just meet him the other day. We have been just sending each cards back and forth. We both talk to each other everyday it fells like. We both send each other Birthday presents and as you can see Christmas presents to.

Well this is going to be on big post on what he sent me he sent me a nice amount of stuff, and awesome quality!

First up we have this 2013 Panini Studios Matt Holliday. These are some really cool looking cards. I love the black and white it gives that cards an old look to them. I think that this would be a cool set to put together if I were to put a set together. 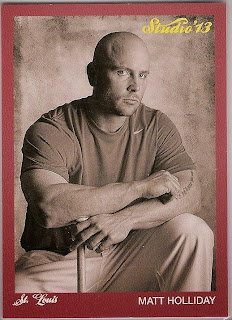 Next is another Panini Studio 2013, but this is the lava flow card. This card scanned like crap so it doesn't show what the card truly looks like. This look a lot nicer in person they are very neat looking. I think that this is a really cool looking refractor design. 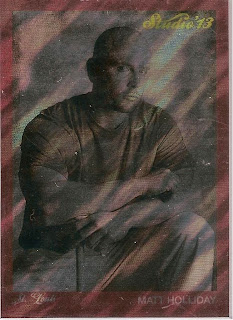 Here we have the 2013 Topps turkey red of Aroldis Chapman. I really like the turkey red cards I just wish that. I could be able to pick up a box before they sold so fast. These are neat looking cards I have to say. I like the painting looks to them. 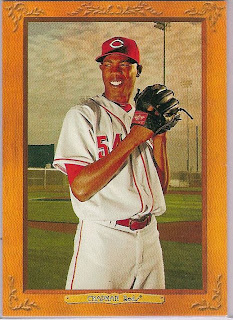 Next is a 2013 Topps All*Star Stitches Aroldis Chapman this is a really relic I really like the orange relic on there they look really neat. The jersey piece on there looks a bit weird to me, because it doesn't look like it came from the middle of the jersey more like elastic part. I don't know, but either way cool relic. 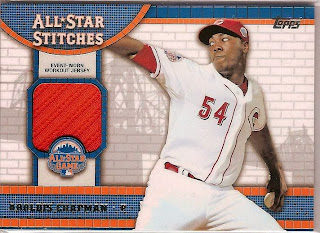 Here is another 2013 Topps All*Star Stitches relic this one is of Adam Wainwright. I guess that the whole jersey must have been like a elastic felling because this Adam Wainwright is the same way. 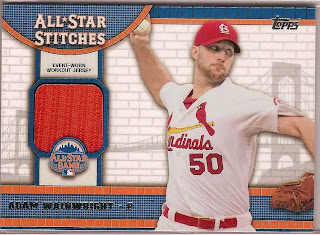 Now here is on of the big things that William got me. This is a 2013 Topps Triple Threads Matt Holliday "Everyday Holiday" gold #D /9. This was one of the cards that I had on my top 10 list I guess that I now can take that off of there. This card is more than what I was wanting I was just wanting one that just had that saying on it, but William was able to get me the gold #D /9, WOW thanks Will. 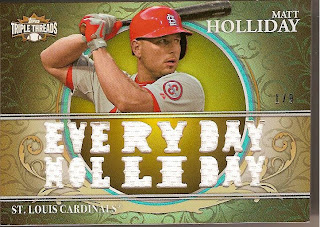 Last, but not lease is the best thing that he sent me in the bunch of stuff is a Ozzie Smith signed baseball. This is a super nice ball, Ozzie has a really nice looking auto this is on of the nicer ones that I have seen. This ball has a Certificate of Authenticity with it, but I was to lazy to take a picture of that and I figured that you probably didn't care what so ever about that part. 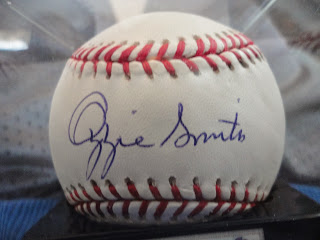