How I Started Collecting Baseball Cards And Memorbilia

Hello everyone Andrew here, I'm just going to be talking about how I got in to collection baseball cards.

When I stared collection cards I stared at the age of ten. I started collecting football cards at the time with my friend Weston from http://fantasticcatch.blogspot.com/ We had no idea what we where really doing we would pull a card numbered out of 50 and stuff and just put them away like normal cards. We would buy only the the more expensive packs because we didn't know how to save are money and would just spend it on cards and stuff. (I still do that) That year we didn't get to much and would just put them in binders how we liked it by player usually.

When the next year came (2011) is the year that we strated collecting baseball cards and football cards at the same time. The reason that we did collecting baseball cards would be my dad has a room down in are basement. Well he has a small closet filled with junk way which back then we thought was really cool. Well Weston thought we should try it out when we did we found something that we really both like and a lot better than football cards. This was a year that I tried Bowman and I loved it so much that is a product that I will buy every year and, This was when we stared collecting a ton of 2011 Topps tiring to complete the set. We didn't know a lot about them or the player's. We didn't really pull any relic's at all and when we finally did I can't remember but I probably think that we freaked out.

The next year after that, was the year that we started collecting 2011 Score football after it had be out for a little bit. With how much we were each getting him and I did actually pull a autograph and it was one of the one that where on the box Cam Newton! This was the sickest card that I have ever pulled from a $1 pack of cards and is going to be that way. I did end up selling this card. I was really needing money at the moment I can't remember supper clear but I think that I sold this card for $140 but, I made a $139 profit. This is the same year that I stared doing player collection of Albert Pujold and Matt Holliday later following Aroldis Chapman. 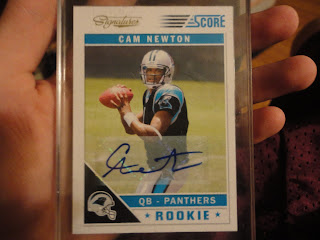 Well that is all of how I really got into collecting and now the newest thing that I really do is I buy a bunch of auto's, relic's and patches off eBay. Well I hope that you guys liked me post on how I got stared into collecting. I know that I could have easily have written a lot more but I didn't want to make it to boring for you guys.