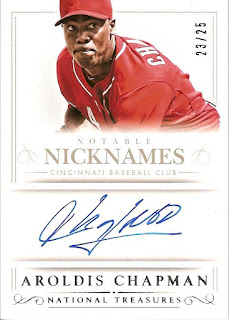 I'v been going crazy with the PC pickups lately finding a bunch of awesome deals on all of them. While I was searching on eBay I was able to find this 2014 National Treasures Notable Nicknames auto of Aroldis Chapman /25. There is only one downside to the card, and that would have to be the fact that he didn't put a nickname on any of his cards, just his signature. It's alright with me thought because I'm was just happy with the fact that I was still able to add another Chapman auto to my PC for under $20

Chapman was just announced yesterday that he will be playing the All-Star Game in Cincinnati, this will be his 4th All-Star game appearance for the Reds. Chapman as been really dominate this season up to this point of the season with 17 saves and has a 1.73 ERA as of yesterday.

If or when he get traded at the trade deadline I'm expecting that he will get a lot more save opportunities than with he would get with the Reds, that's if he go's to a better team or team that could use someone for a lot of save opportunities.