William sent me some gold!

Hello everyone, Andrew here I got a sweet package in the mail today from William, he sent me a BUNCH of cards I scanned a bunch, but not all of them because this post would be a mile long. Well let me get on with the awesome stuff that I received.

Ok first off we have 4 Topps Chrome that he sent me. First we have a pretty sweet looking Albert Pujols dynamic skills die cut, next a Jon Jay refactor aw I remember that catch, a Adam Wainwright refractor Wano is pretty awesome, a Albert Pujols reprint card thing, and last we have this sweet looking David Freese die cut. this a pretty card a lot better than what the scan shows, the refractors look a lot better to. 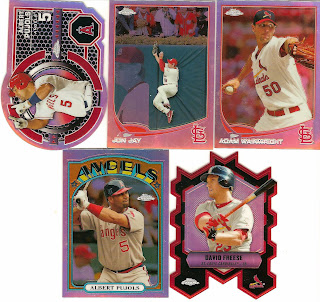 William also sent me some 2013 Cooperstown. My though on then is that this a pretty awesome set only if you are interested in the old guys. I am so these are some pretty awesome cards, I would do the set if I had the money. The two cards show, first is a Dizzy Dean, and a Joe Medwiek. 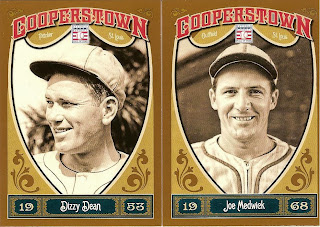 This a insert in the 2013 Cooperstown set, this is a card that shows a 1931 world series game 6 ticket, which we won that world series. 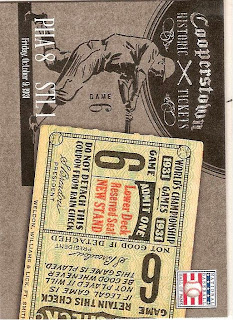 This a sweet parallel it's a Stan "the man" Musial green broken ice. I truly love this card! 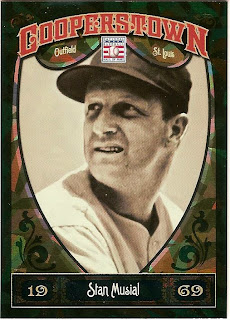 He also sent me two Home Town Heroes. First off is Willie McGee, and a John Tudor. This is another set like Cooperstown with a bunch of old players. I don't think I like this as much a Cooperstown tho, but they are pretty cool. 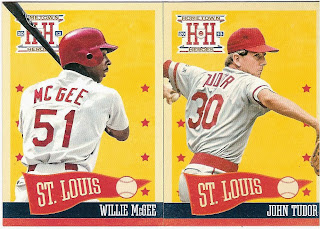 And now for the gold part that is in the title,but in this case it's purple. This is a 2008 Baseball Heroes Matt Holliday auto 2/5!!!! 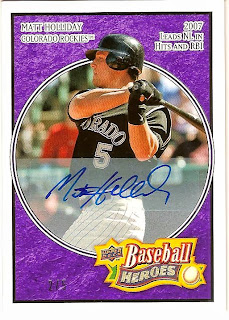 Thank William for the awesome stuff!