Hello everyone Andrew here and I just got a package today from Michael Chase of    http://cardraven.blogspot.com/  and I got to say this thing was loaded with awesome! When I got the package in the mail I had no idea what to suspect. It was one of those trades where you send them stuff and they send you stuff and you have no idea what you will get in return but, I got to say I was surprised to see all this wonderful stuff in there! 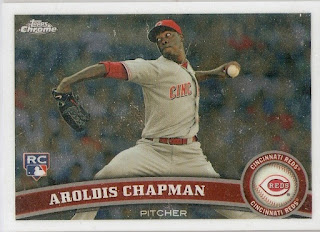 First off we start off with this really nice looking Aroldis Chapman Topps Chrome 2011 Really love it! I was thinking about getting this one time but everyone wants to over price it on eBay and other stupid places. 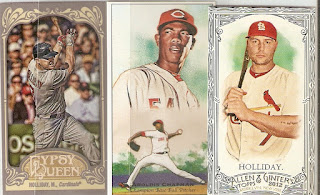 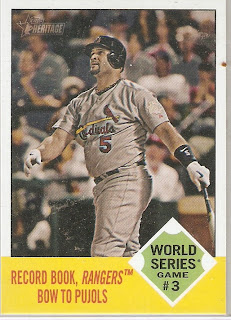 Here we have a awesome 2012 Topps Heritage Albert Pujols! As I said in my last post in this picture he is saying he just hit a home run and there is nothing you can do. Ok on with the card. In the 2011 World Series game three Albert Pujols had 6 At Bats, and 3 HR's. He got on base 5 out of the 6 times he was up. Yeah I think that was a good game for him! And oh we won that game 12-7! 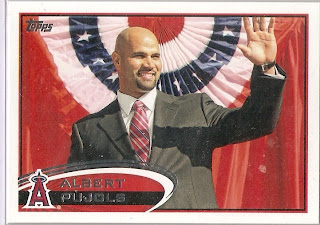 Last but not lease here was the best card in the package!!! A Albert Pujols 2012 Topps SP! I have been wanting this thing ever since I seen that is was out there! So Thank You Michael! This was a awesome package and I hope we can trade again sometime!
Posted by Unknown at 2/16/2013