I am sorry that I have not posted in a long time I just have never had any thing to talk about. Since I got some mail today from by buddy William over at foulbunt that is is blog if you want to go and check it out.Me and William like to send me stuff all the time because he is a GREAT guy. so THANK YOU WILLIAM!
he sent me some interesting stuff that I am about to show you guys. And I just want to say I can't believe some of the stuff he sent me!!! 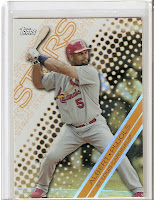 Here we have for Pujols that I like the first one on the left is a Bowman in his Angles I don't care if he left the Cards he is still my Favorite player. I love the GQ the looks of it are awesome. The other two are pretty cool first one is a 2007 and the other is a 2005. 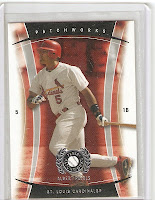 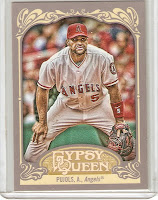 Here is some Chapman's that are pretty sweet looking I love the bowman Diamond and the 1st bowman card. I live the Bowman Platinum the most because it is his RC card. 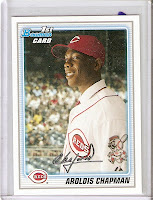 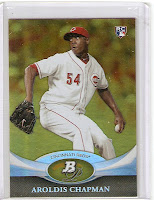 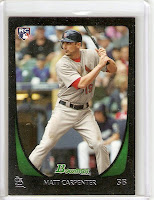 Here is some more cards that are pretty nice that I thought I would show you guys.first we have a David Freese GQ green mine. A Yadier Molina 2007 blue numbered to 199.
then we have a Matt Carpenter Bowman 2011 RC. Last we have a So Taguchi jersey card numbered to 250 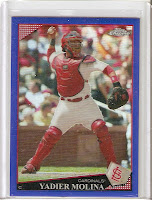 I saved the best for last!!! 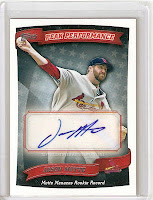 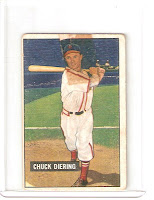 Here are the three Best cards that he sent me fist is a Jason Mott Topps 2010 auto this is a great card.
Second we have a Wilmer Mizell Topps 1953.
Three we have a Chuck Diering Bowman 1951. And last but not lest a signed ball by Russ Ortiz!!! 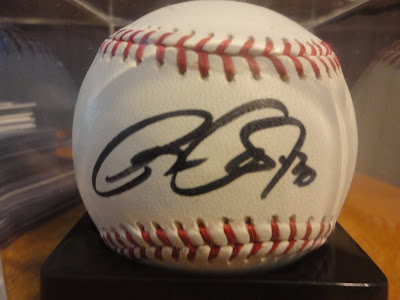 Thanks William!! And ever one have a great day!